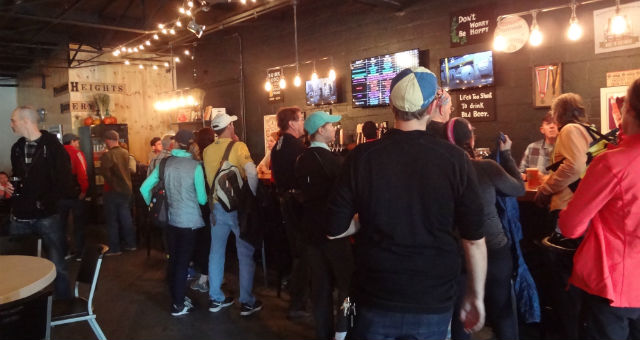 The Baltimore Chapter of AIA was founded in 1871 by eighteen men concerned about unfair competition practices that hurt the profession of architecture. We have since grown to 1,300 members engaged in over 20 committees that focus on their particular passions that serve our profession.
BAF (the Baltimore Architecture Foundation) was launched in 1987 as a non-profit, educational, public-oriented outreach organization. It focuses its attention and energies on helping to promote an understanding of and an appreciation for Baltimore’s built environment.  BAF is also actively engaged in researching the early architectural firms and practitioners of architecture in Baltimore.
All relationships have their challenges. For nearly 20 years, AIABaltimore and BAF believed that single life was the better choice. But beginning in 2013, the two groups, each focused on different aspects of Baltimore Architecture, thought it a good idea to begin dating towards considering a more serious relationship. Over the past 3 years this has matured into a stronger “marriage” where each partner retains its essential identity while benefiting from the complementary talents/strengths of the other:

One might see this new AIA/BAF partnership as a yin-yang relationship. AIA’s members benefit from BAF’s efforts to increase architectural literacy and appreciation by the general public of architecture and the important role architects play in fashioning the built environment. BAF benefits through the expertise and talents of AIA members (past and current) who have been responsible for creating the rich tapestry of Baltimore Architecture it is BAF’s mission to celebrate and preserve. Although both organizations have done this separately in the past, it is clear that together much more is being accomplished. This is truly a good example of 1+1 equaling a great deal more than 2.
So what is next in store for this architectural marriage? Having shattered the Big Sibs AIA membership number barrier, the potential of expanding BAF’s membership is now a very compelling potential goal. There are so many Baltimoreans among us who are interested in the arts. And it is quite common to hear from many others who “always wanted to be an architect.” It would be invigorating to bring their curiosity and fresh energy into the sphere of our conjoined organization as volunteers and BAF program/committee leaders. BAF is clearly the best vehicle for more directly involving the general public as active members. In this context, our plan for greater involvement in BAF may be the “secret weapon” to make this new surge in BAF engaged, volunteering members happen.
I would like to thank both Tracey Clark and Meg Fairfax Fielding for their very dedicated leadership of BAF over the past several years. Judging from past experience, BAF will benefit mightily from continued exceptional leadership and the more recent initiatives to inspire wide participation in new directions. Strap on your seat belts and get prepared for an exciting ride!
I look forward to hearing about your own perceptions/suggestions relative to the BAF/AIA Baltimore partnership. And I strongly welcome your direct involvement in making this already great marriage even better. Thanks in advance for all you will do to help with this important work in the year ahead.
I am honored by all so many dedicated members do for both BAF and our great AIABaltimore Chapter.