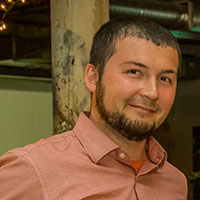 Name: Jimmy Leonard, Assoc. AIA
CivicLAB Class: 2016
Alma Mater: North Carolina State University & UNC Greensboro
Hometown: Greensboro, North Carolina
Why was it important for you to take part in CivicLAB?
While in school, I had the opportunity to work on various projects centered on engaging with people involved in public transportation, affordable housing, and the design/build of a park pavilion. I discovered the passion I had not only for the type of projects I was working on but the process of engaging community stakeholders. After moving to Baltimore in the spring of 2014 and working for a few months at Design Collective, Inc, I began volunteering with the Neighborhood Design Center. After a while, I hit a point mentally where I wanted to learn more about big picture issues, frameworks, and policies affecting my efforts at work and as a volunteer. Given my “new in town” status, I believed CivicLAB was a good place to start. I was excited to meet other folks that might share similar passions, were asking the same internal questions, and having similar experiences. Part of being a leader and a problem solver is knowing how to figure out the best way to make the pieces fit together. At the time, I felt like I needed to learn what the pieces were in Baltimore. While I’m still learning about the pieces, I feel like CivicLAB was a jumping off point for me.
Since participating in CivicLAB what new leadership opportunities have you discovered?
I was asked to join the Neighborhood Design Center’s board of directors in late 2016. There was no hesitation to accept on my part, nor did I wait to be officially confirmed by the board before jumping into action. So far, I’ve been able to participate in various committees in the NDC’s strategic planning process, planning the 50th Anniversary Gala, planning the Association for Community Design Conference in 2018 in Baltimore, and supporting the D-Center conversations moving forward. Since joining the board of directors, I’ve developed a different perspective on the organization from when I was a volunteer. I think I finally found my feet and where I fit in best among the other board members. I’m looking to turn it up a notch in 2018 and to continue to grow as a citizen of Baltimore.
How can architects/designers become better advocates for the profession and the built environment?
Architects are in charge of the health, safety and welfare of people, right? We have to be advocates for others outside of the profession first, especially those without a voice and experts in other fields, before we can be advocates for ourselves and the buildings we design. Empathy goes a long way as does acknowledging that architecture is only a single component in a complex system of issues that is our society. That is a good place to start.
What makes this an exciting time to be a Citizen Architect in Baltimore?
Samuel Mockbee and the Rural Studio was an incredible influence on me while I was in school. Though there has been thoughtful discourse and critique of the program over time, his legacy spawned many other similar programs that have been as successful, if not more successful. Having experienced NC State’s first design/build studio back in 2011, I can personally attest to the positive impact of the educational method and the project delivery model. Now I’m a proponent of local institutions, universities, and non-profits working together to develop a similar model that would be more inclusive of other fields of study while dealing with issues specific to Baltimore. Half serious and half joking, I wrote I wanted to be the Samuel Mockbee of Baltimore as a future goal in one of my first performance reviews at work after moving up here. Nobody acknowledged the goal, which I thought was weird at the time, but in retrospect I think the lack of conversation and acknowledgement about what the goal meant pointed my compass outside the workplace. I know there are others with a similar itch and calling; there are so many of us trying to create and connect dots to make Baltimore a better place for everyone. We just need to continue to find each other, to connect, to converse, to collaborate, and to work together. One day at a time, one dot at time.
Any hobbies outside of leadership, advocacy, architecture?
Sci-Fi movies and books (The Expanse Series!), world and character creation fascinates me (I grew up playing D&D), building models (not the architectural kind), napping (mental breaks are healthy for the mind), cheering for my scientist wife’s growing leather crafting hobby and following, and hanging out with the Jasperr, aka Jabs, aka Jabbas, aka Jasperrnaut the Duke of Read (our dog).